10 diverse designs made from machine-cut aluminium 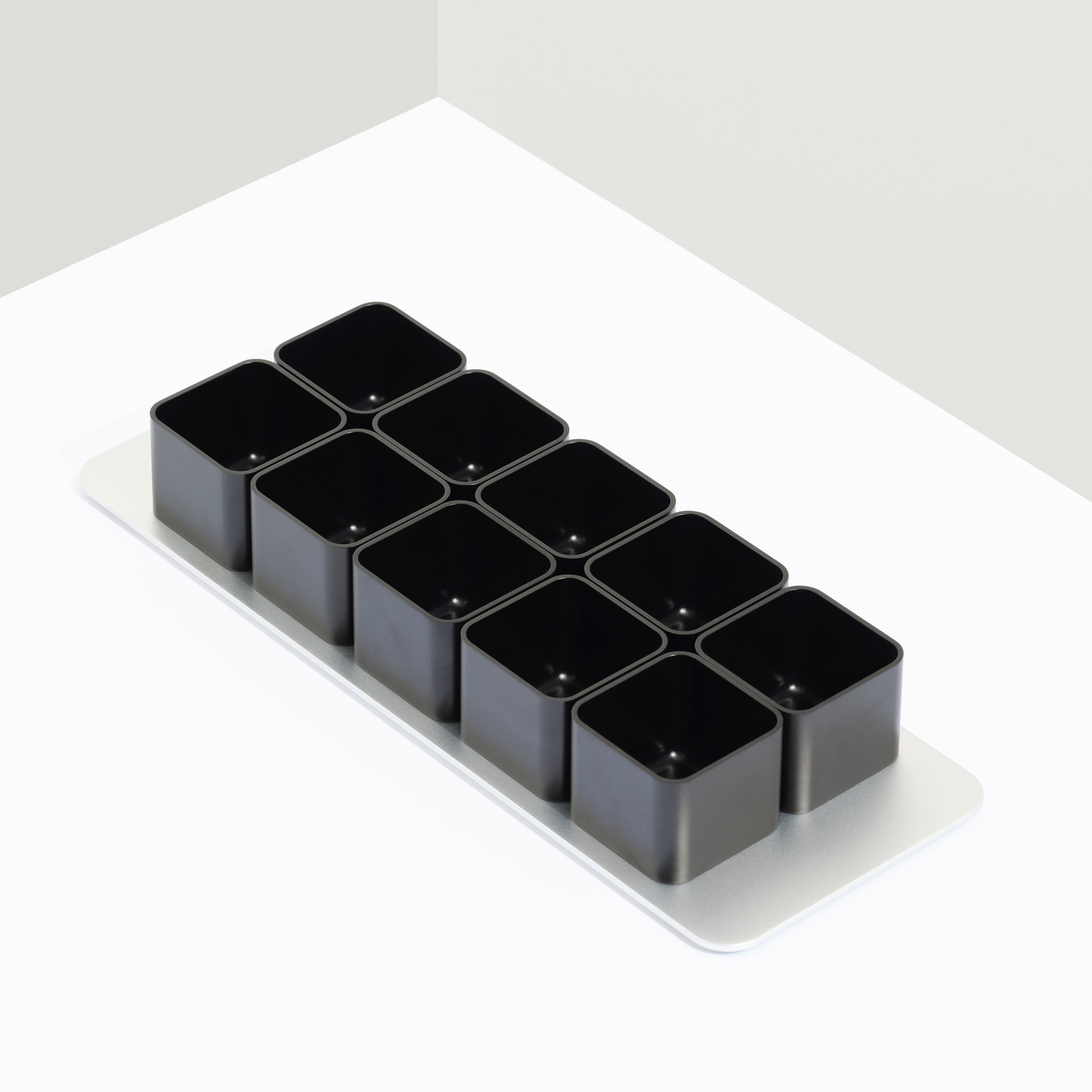 Salt and pepper shakers and an ice-cube tray are among the objects that Canadian designers have made from machined aluminium for an exhibition at this year's Toronto design week.

"Designers from across Canada have come together to create a collection of machined aluminium objects," said the team. "Including both practical prototypes and pieces of sculpture, the show covers diverse range of themes unified by a single medium."

It forms part of the Toronto Design Offsite Festival (TO DO) an annual event composed of design-focused exhibits which kicks off on 17 January to runs alongside interiors trade-fair IDS Toronto.

Aluminum Group is presented at the Erin Stump Projects (ESP), an art and design gallery in the city's west end neighbourhood.

Each item was modelled in three dimensions on a computer and then cut from a block of aluminium using a CNC-router. The result is a group of objects with a variety of aesthetics and uses.

Read on for more about 10 of the objects on display: 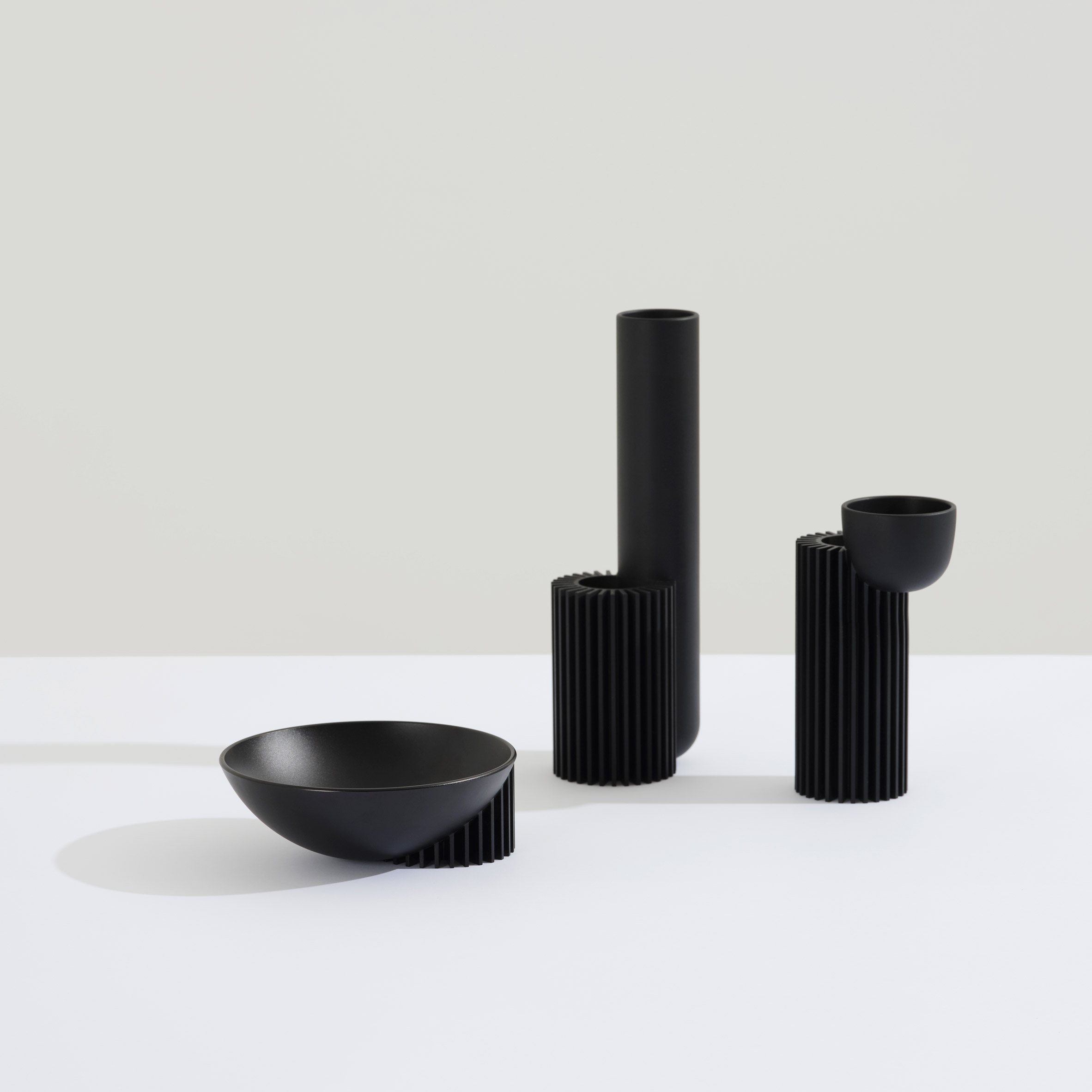 The Temp set of tableware by Anony Studio comprises bowls, vases and cups with circular, slatted bases that are modelled on the form of heat sinks devices with a large surface area to allow heat to dissipate from electrical equipment.

Anony Studio is a multi-disciplinary Toronto studio that designs products, lighting and spaces. The studio aims to manufacture locally where possible.

Rachel Bussin has created a black ice-cube tray on a silver indented base, with 10 segments that can be pulled apart individually to release a cube of ice.

"The intent of the design was to take an overlooked product and make it feel more significant rather than disposable," said Bussin.

"An ice cube tray is generally regarded as a mundane object, but if designed nicely it can make the simple act of preparing ice more enjoyable. All objects we interact with should be aesthetic and satisfying to use, not just the ones on display." 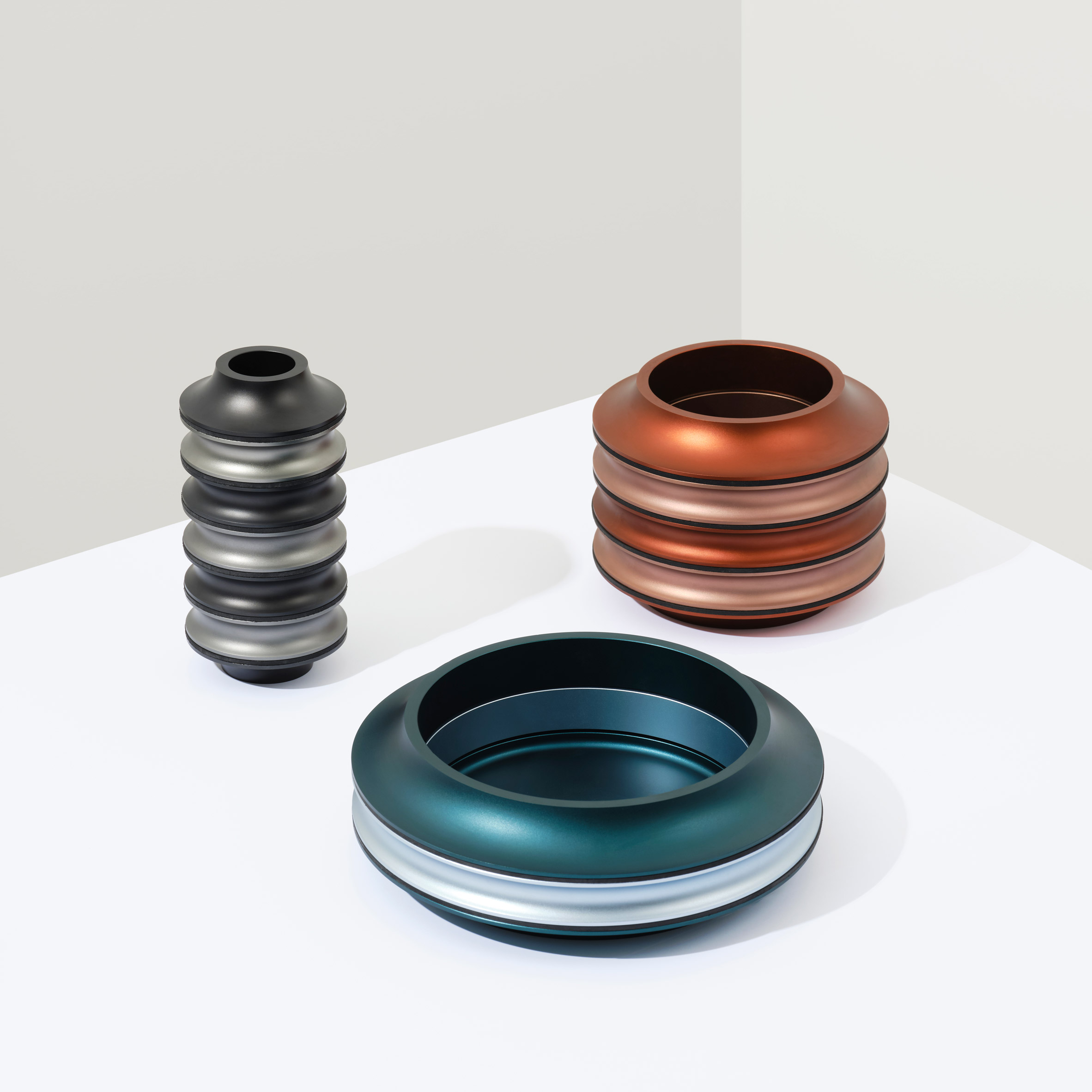 This series of vases by Tom Chung are based on the size of pipe gaskets the mechanical seals that fill the space between two adjoining pipes.

"The rings thread together to make variable height vases with a water tight seal," said Chung.

The dual-coloured vases come in various sizes, from taller versions that can hold just a few stems, to wider, shallow vessels, with each relating to the size of a particular pipe. 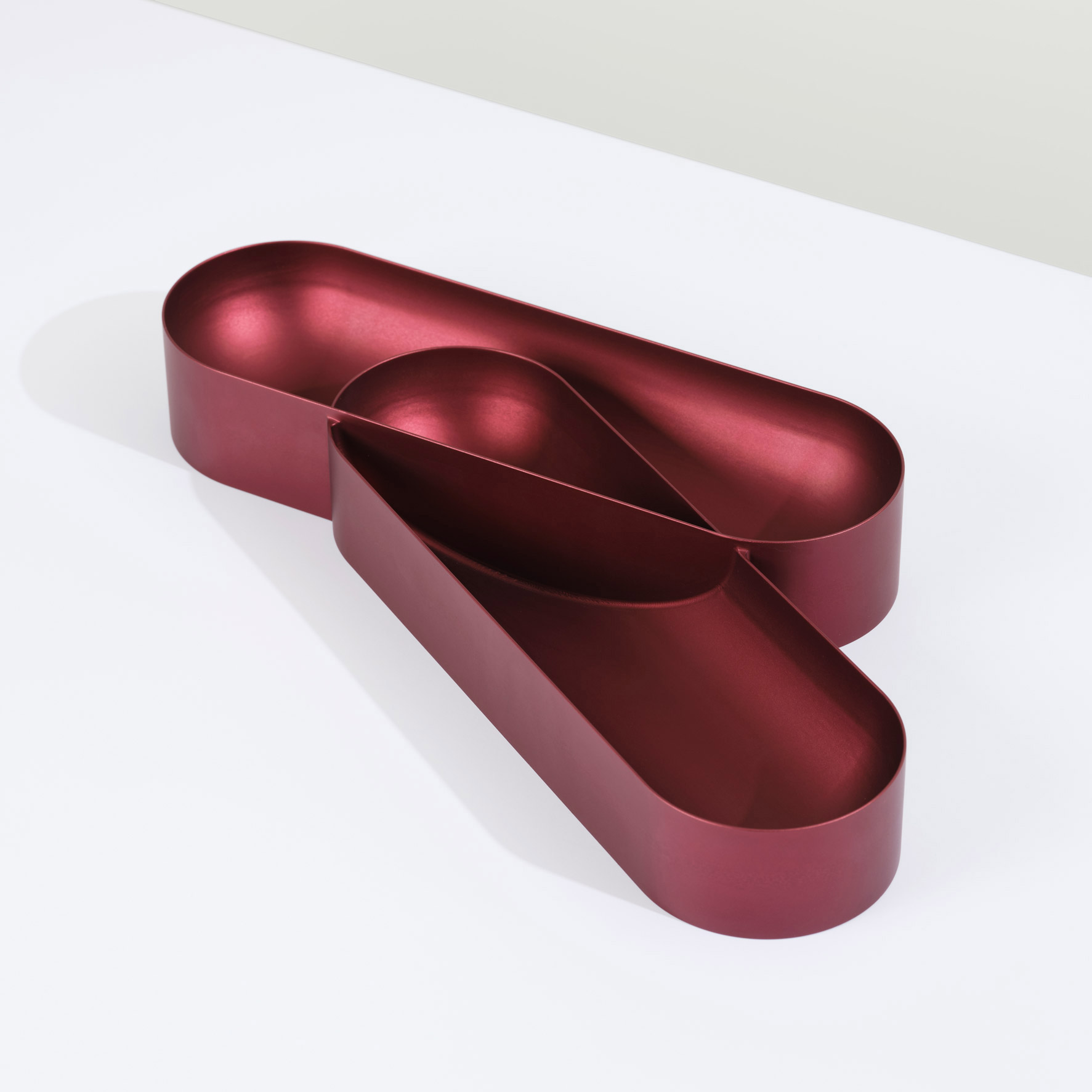 "Inspired by time-lapsed movement of a ship pulling into dock the compound bowl sits between stillness and motion," said Ramsey.

"The piece is composed of two vessel forms that intersect one another creating three distinct sections useful for organising small objects." 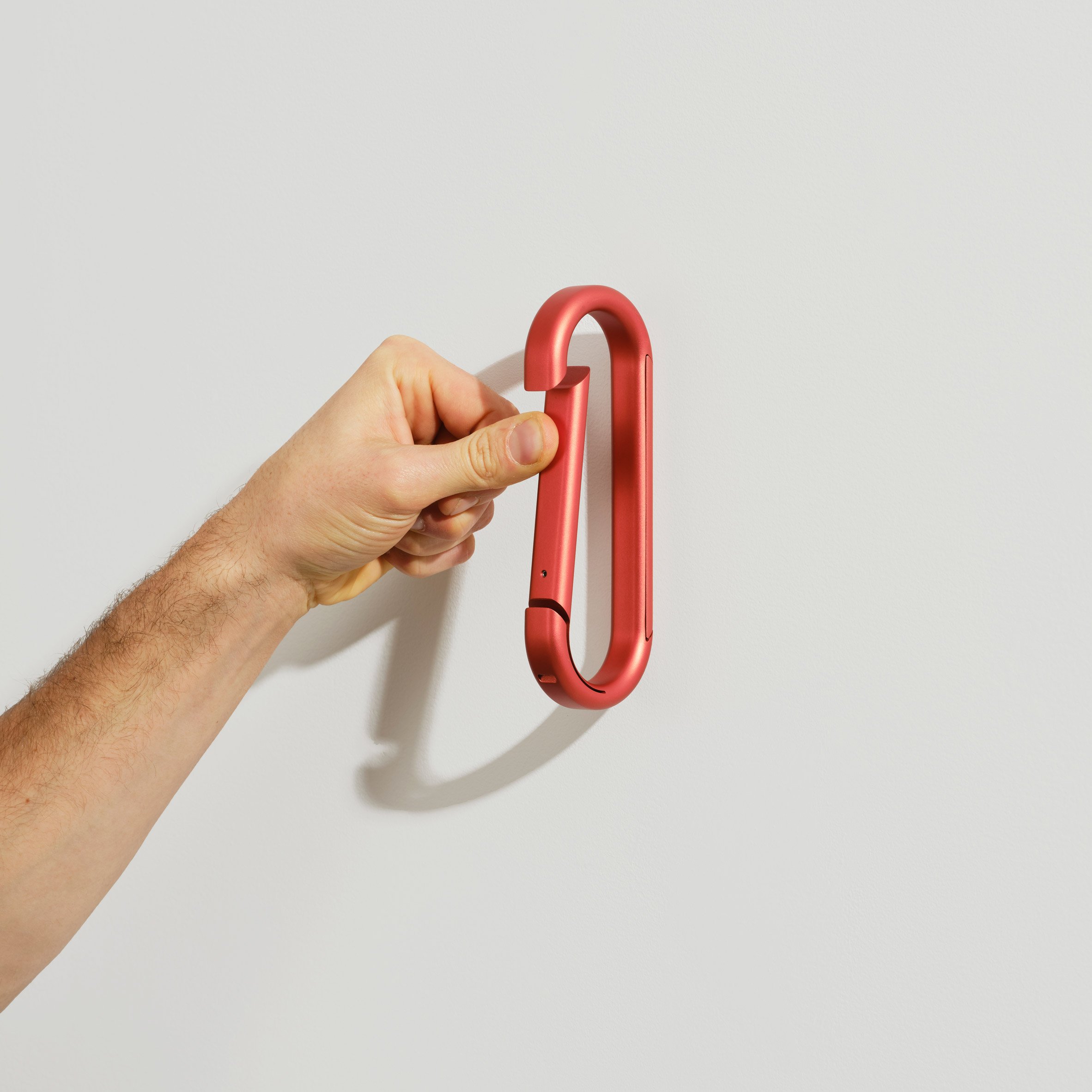 Heintzman's design is a simple clip that can be attached to a wall for holding various objects, modelled on the carabiners that might be used in climbing. 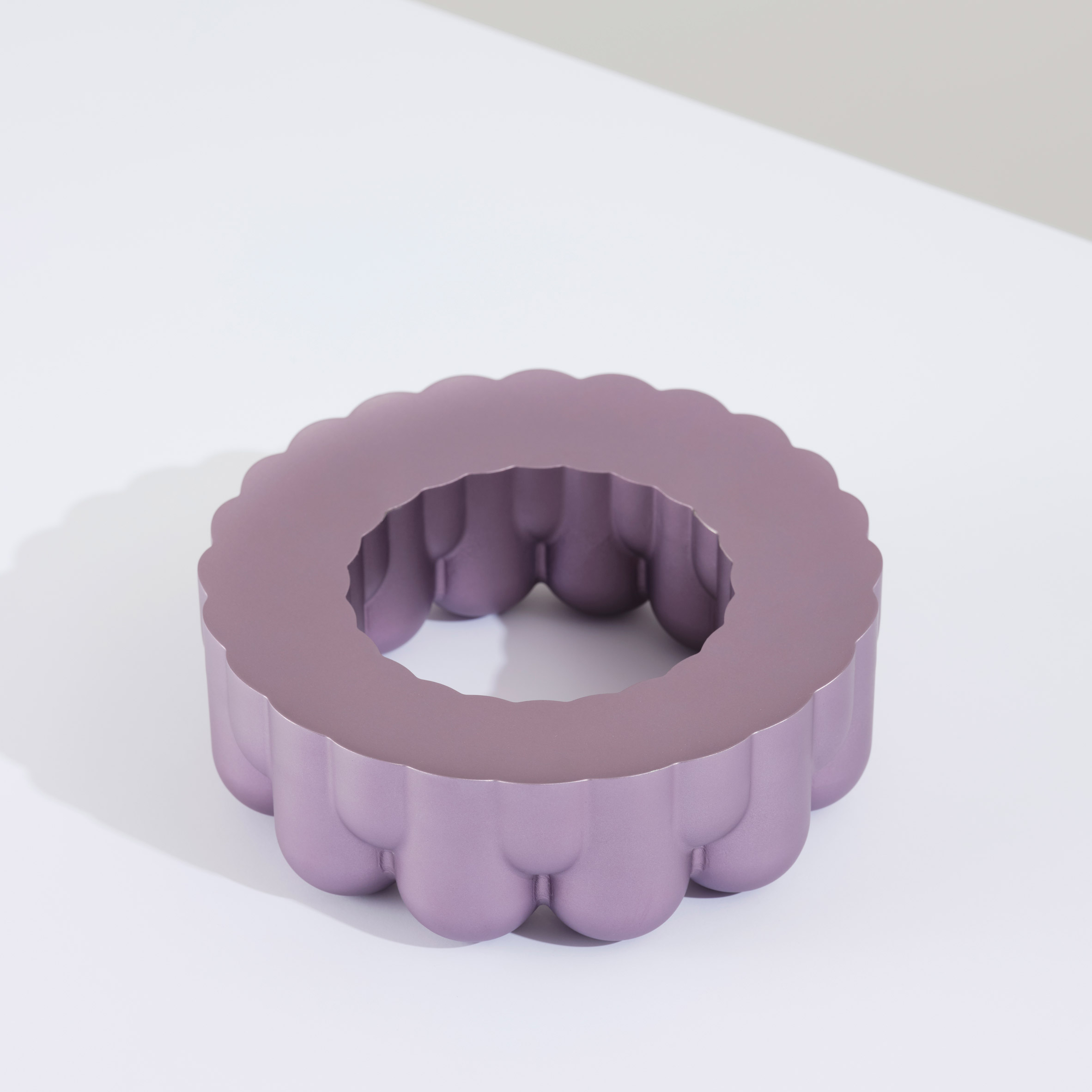 "As we move towards a cashless future, the concept of a coin tray may need an update," said Chifen Cheng. "This solid aluminium piece is a celebration of the digital manufacturing process and its material flow that leads to a more distributed and sustainable design."

The design is inspired by an old French cake mould. Its "defensive architecture" protects the user's phone, cards and keys, while hiding clutter in the cavity.

Cheng added that the the unusual shape of the object, appropriately called Blobs, highlight the "accuracy and the flexibility of CNC milling". 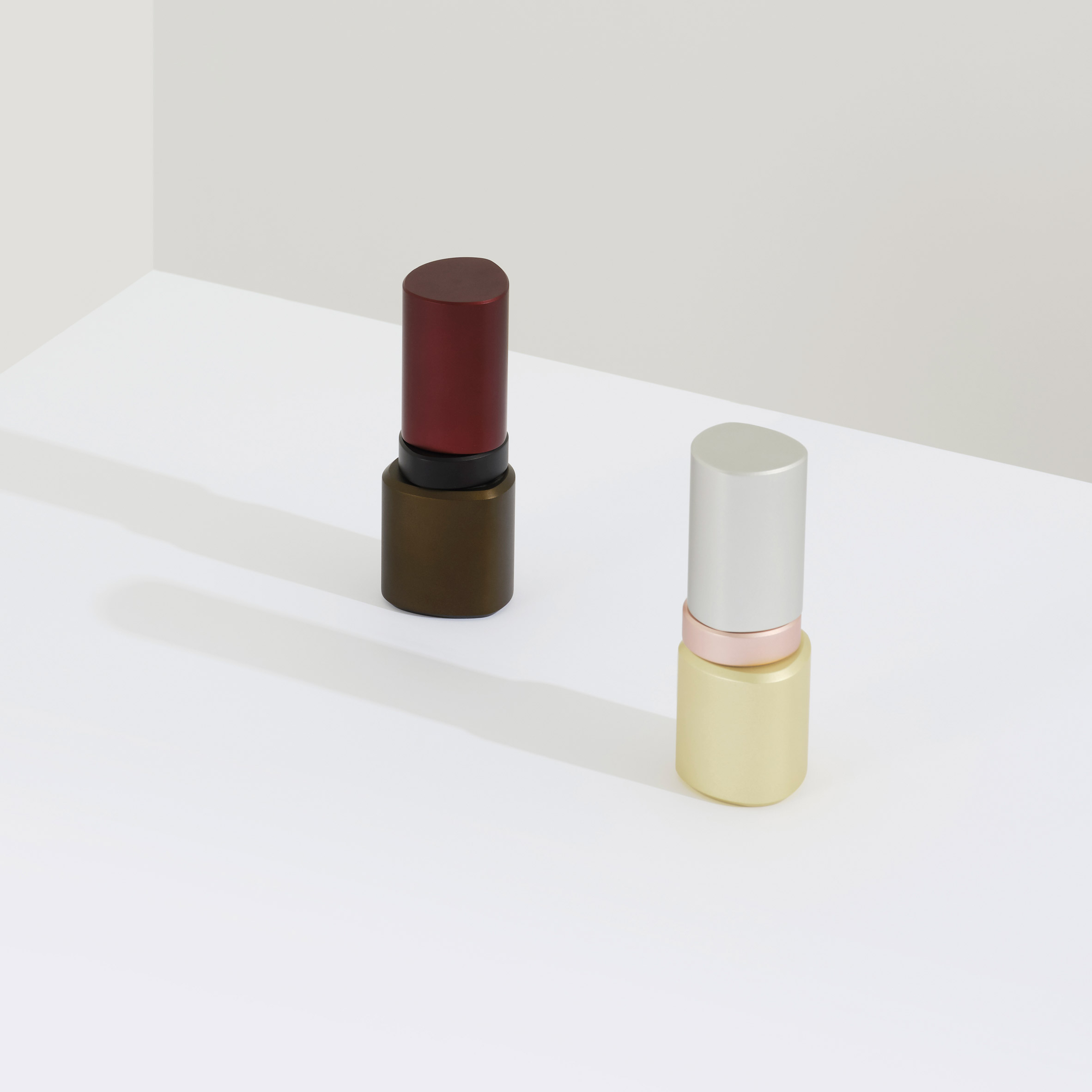 "The Mills are composed of three stacked, offset interlocking elements," said Peet. "Each of the elements is finished with a chamfered edge, to give a visual separation between them and to communicate their 'stacked' nature and apparent independence."

The top two sections connect to the base via the mechanical ceramic crush grinder. As the mill is used the three elements rotate off-axis resulting in an ever changing composition.

Peet started with a series of sketches that he turned into CAD models because he wanted to combine the notions of organic, hand-drawn shapes with the precision of machine cutting. 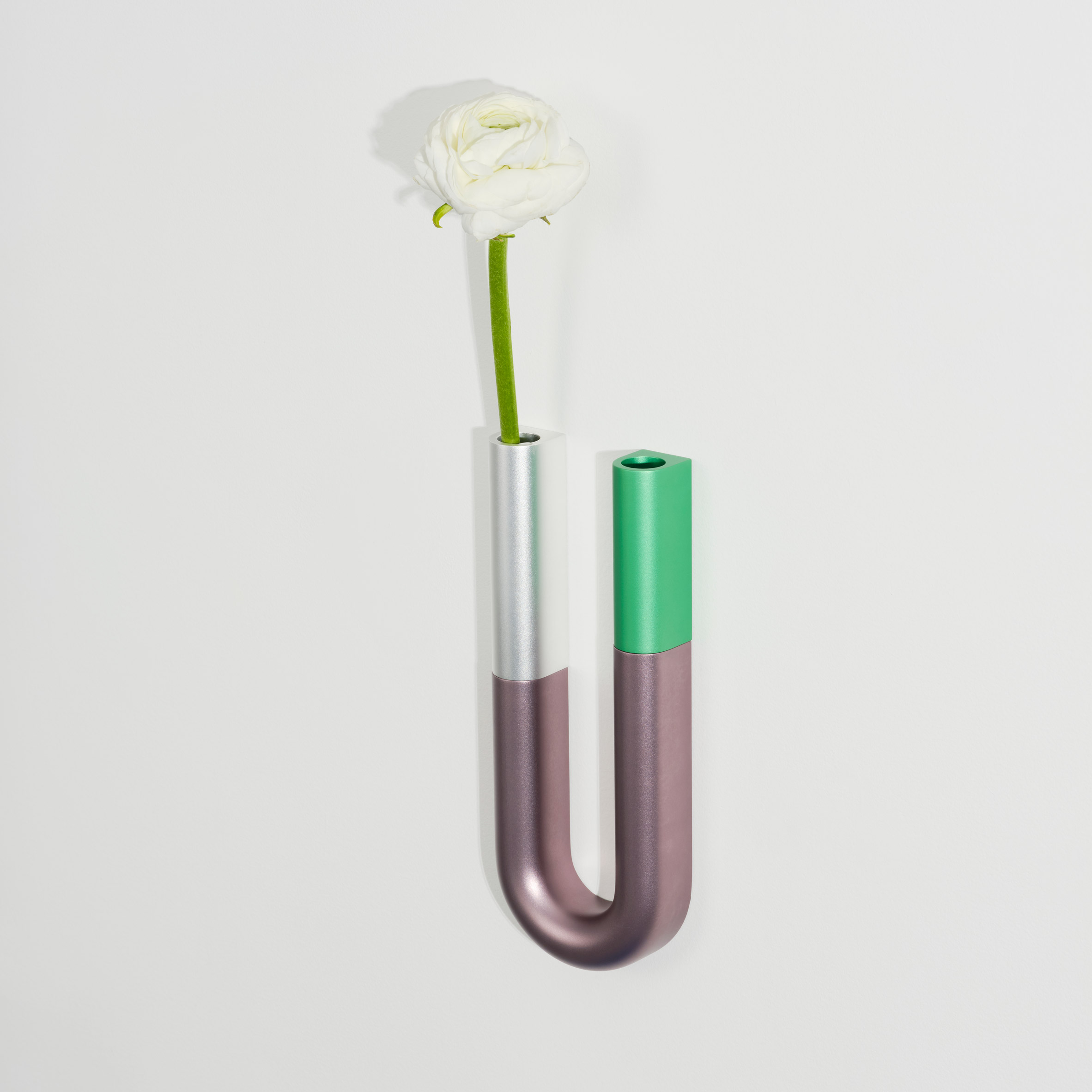 "The slim aluminium vases can display flowers as a unit on the wall or as separate pieces on a table, where they can also be flipped to hold a standard candle, if desired." 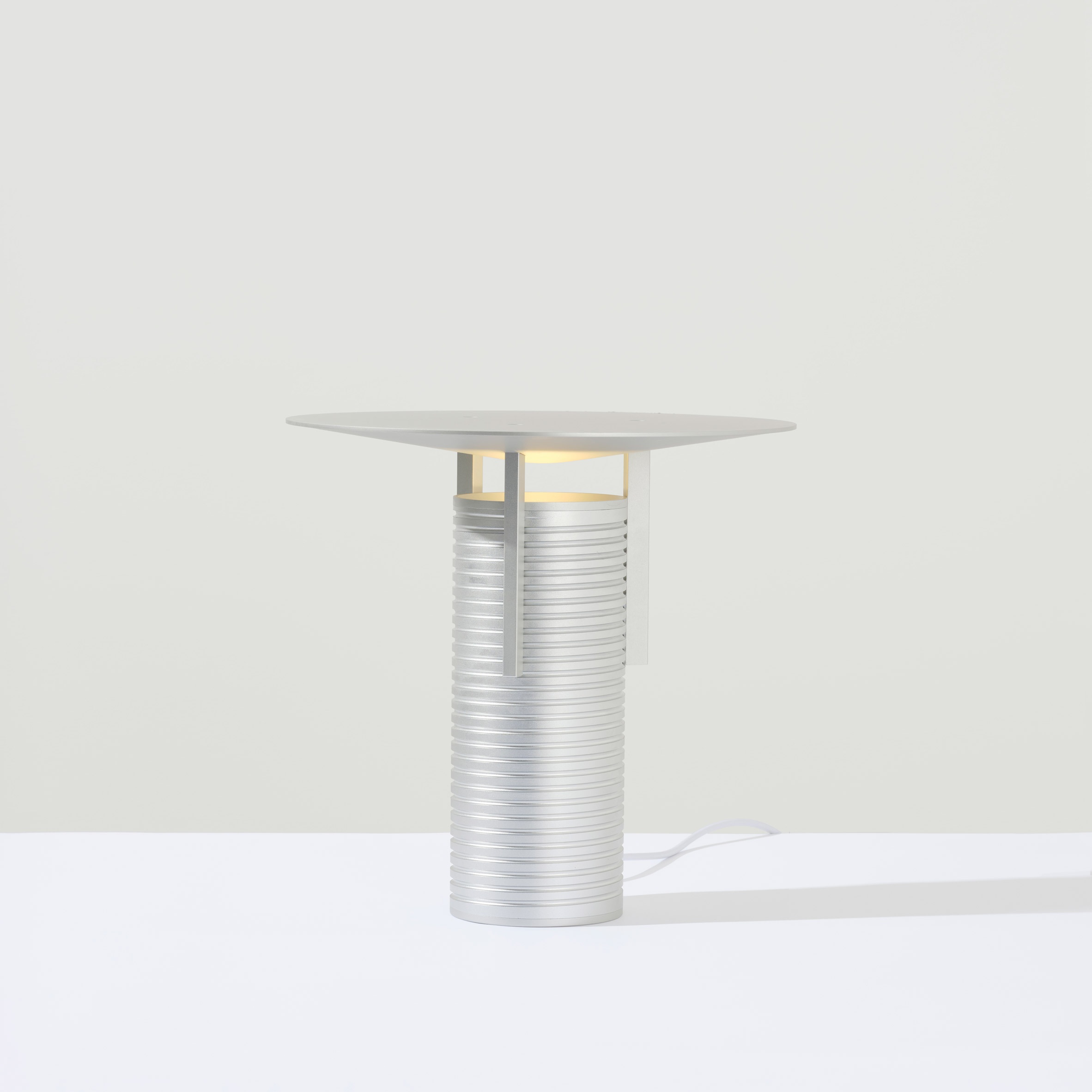 Exhibition curator Jamie Wolfond has also created a series of work for the exhibition, including this standard lamp, called Thread Lamp.

"An upward-facing light source bounces off a milled aluminium shade to emit a bright but indirect glow," he told Dezeen.

"Threads on the lamp body make it easy to adjust the shade height, changing the angle and intensity of the bounced light." 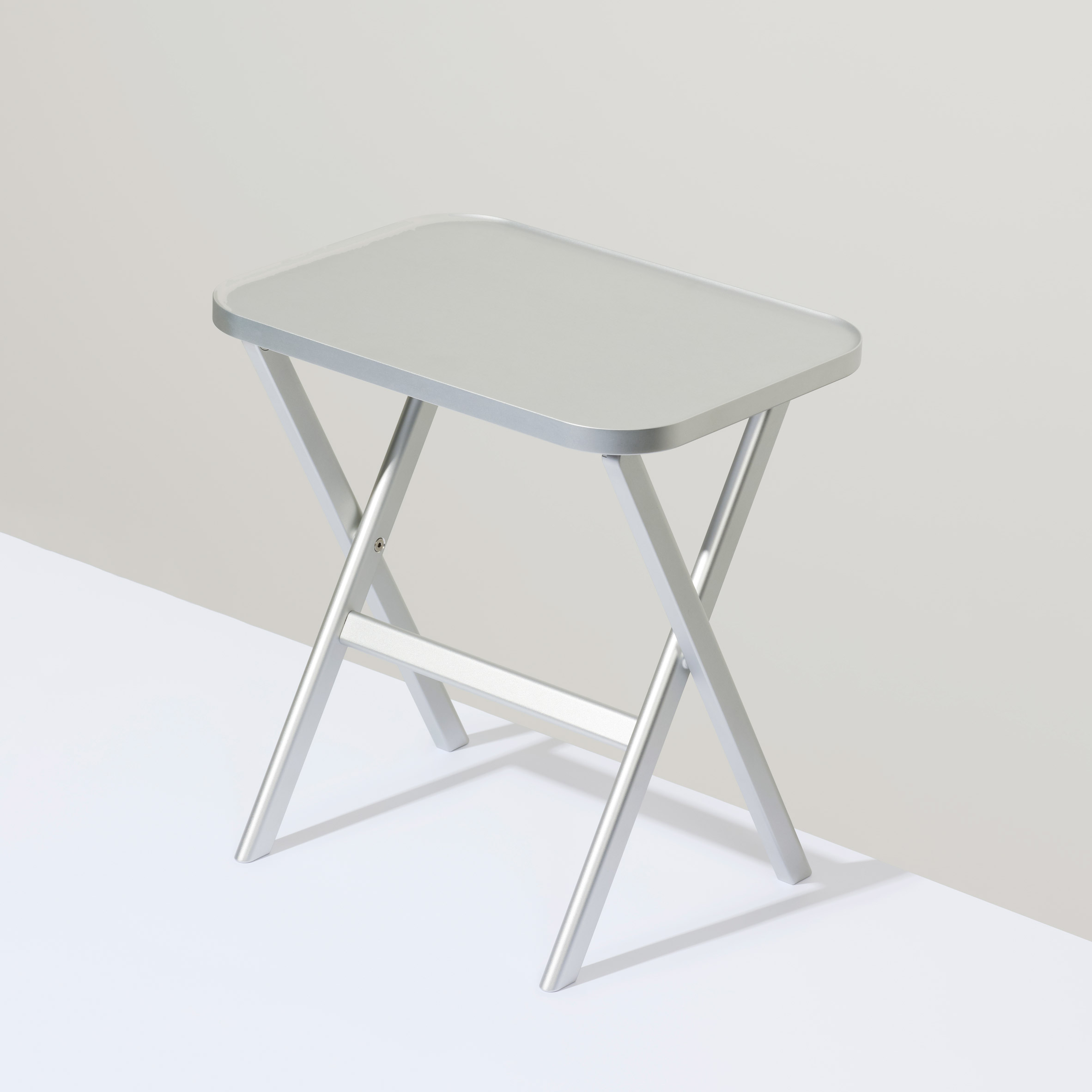 MSDS meanwhile has taken the standard shape of a folding TV table and made it from aluminium.

"Both the precision of the process and the refinement of detail permitted by the material are used to dignify the archetype," said the studio.

The post 10 diverse designs made from machine-cut aluminium appeared first on Dezeen.