The intriguing mystery at the center of Loki got even more compelling with the fifth episode, “Journey into Mystery.” Not only did Loki (Tom Hiddleston) meet a whole crew of different variations of the God of Mischief, but The Void in which they’ve all been banished was chock full of Easter eggs referencing deep cuts from the history of Marvel Comics, calling back to familiar items from the Marvel Cinematic Universe, and much more. So let’s take a run-through of over a dozen Loki episode 5 Easter eggs that are worth a closer look.

Before we begin, we’d just like to clarify that Easter eggs are not clear and obvious references to the comics that Marvel Studios is adapting. Take a spin around the internet and you’ll see articles labeling Alioth and the other assorted Loki variants as Easter eggs. Those aren’t Easter eggs. For some real Easter eggs, keep reading below. 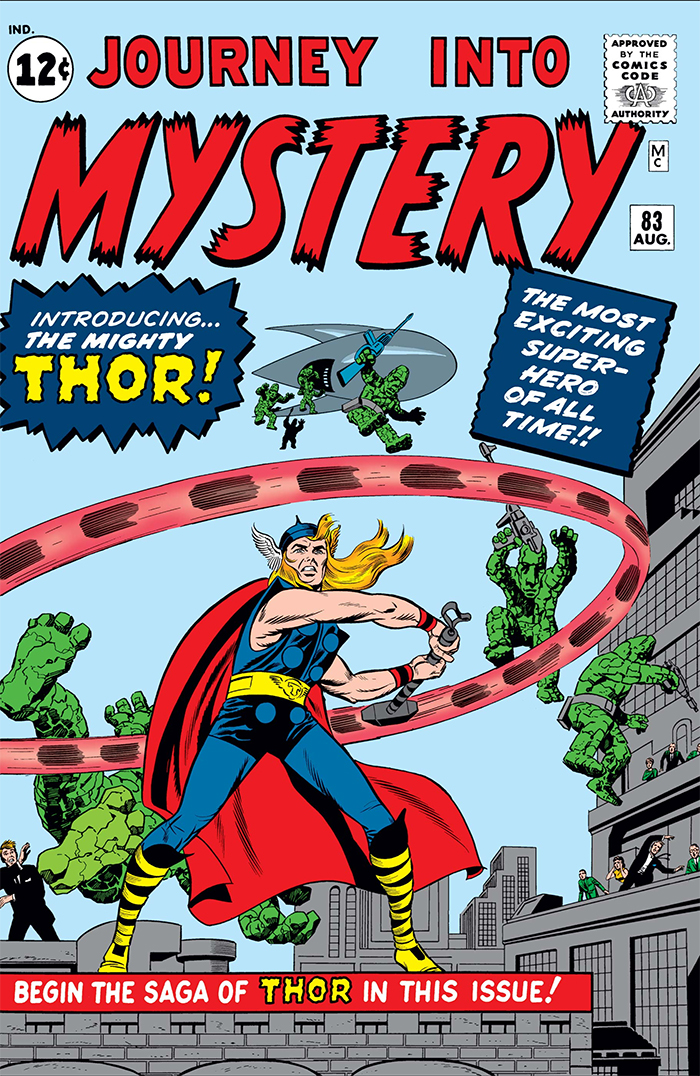 First of all, the title of this episode of Loki is an Easter egg itself. Journey into Mystery is the Marvel Comics title where Thor debuted, and it would later go on to be named after the popular God of Thunder instead of maintaining the more generic title. It’s similar to how Spider-Man debuted in a series of comics called Amazing Fantasy before getting his own comic book series.

Stark Tower was seen lingering in the background of the final shot of the fourth episode of Loki, sitting among other destroyed buildings in The Void. However, this version of Stark Tower is a little different. Instead of saying Stark on the side of the building, it says “Qeng.” That’s a reference to Qeng Enterprises, the company that bought Avengers Tower from Stark Industries. This happens in Avengers: Ultron Forever #1 and features CEO Mr. Gryphon engaging in some villainous activity. The reference is probably nothing more than a wink to comic fans.

In Marvel Comics, the Mad Titan known as Thanos can be seen briefly using a helicopter with his name on it while trying to obtain the Cosmic Cube from Hellcat. It’s one of the sillier moments in Marvel Comics history, and the moment is rather infamous on social media. In this episode, the Thanos-Copter miraculously becomes part of the Marvel Cinematic Universe, seen sitting in the background as the Lokis walk across The Void. I wonder if anyone won a bet due to its addition to the MCU.

Is That a Yellow Jacket Helmet?

Just before we see the Thanos-Copter, there’s a wide shot following Loki, Classic Loki, Kid Loki and Boastful Loki as they walk back to their lair. There’s a large head or helmet of some kind sitting in the middle of the landscape. It looks similar to that of a helmet Darren Cross might have worn as Yellow Jacket in the Ant-Man franchise, but the design doesn’t match with the one we see in the movie. Maybe it’s an alternate version of the character, one that could grow to a larger size like Ant-Man instead of just shrinking.

Since this episode of Loki introduced us to an Alligator Loki, it only makes sense that we also get to see an animal version of another Asgardian. As we pan through all the trash sitting above the Loki Lair in The Void, right after we see Mjolnir just lying amongst the rubble, there’s a little frog version of Thor trapped in a jar labeled T-365. That’s Throg, a frog version of the God of Thunder from Thor #365, written and penciled by Walter Simonson.

This is Thor transformed into a frog by the mischievous Loki. In the comic, he leads an assembly of alligators against an army of rats in the sewers of New York City. We’re not sure how he got stuck in that jar, but it probably has something to do with a Loki variant. There’s also another version of Throg that’s actually a character named Simon Walterson (in tribute to the character’s creator) who was turned into a frog by a witch, and…you know what, you can just go read about it yourself because it’s weird and silly and fun to discover on your own.

This is such a fun Easter egg, and it’s not even reference to anything from Marvel Comics. Polybius is a fictional 1980s arcade game that has become an urban legend. According to modern myth, Polybius was a government-run crowdsourced psychology experiment that unfolded in Portland, Oregon in 1981. The game is said to produce intense psychoactive and addictive effects in the player. Only a few machines were said to exist, and the agency known as Men in Black was even said to collect data from the machines. You can learn more about it over here.

As if Loki wasn’t already my favorite Marvel Studios series so far, the show features a reference to the best juicebox inspired by the best paranormal comedy around. Kid Loki can be seen holding an Ecto Cooler Hi-C juice box, the drink inspired by Ghostbusters. This tasty beverage made a comeback when Ghostbusters: Answer the Call debuted in 2016, but it has since disappeared again. Fingers crossed it will come back when Ghostbusters: Afterlife arrives later this year.

During a sequence in this episode, a huge naval ship suddenly appears in The Void. That ship is none other than the USS Eldridge (DE-173), a vessel that has been linked to an alleged military project known as The Philadelphia Experiment. The ship in question was said to have been rendered invisible or cloaked to enemy devices. But Loki would seem to propose that the ship wasn’t just cloaked but removed from time entirely. It’s another fun reference to a conspiracy theory/urban legend.

Oswald and the Martians

When Sylvie gets picked up by Mobius in a pizza delivery car, there’s a brief glimpse of a drive-in movie theater marquee. What was playing at this drive-in? Oswald and The Martians, which would seem to reference a 1930 animated short called Mars where Oswald the Lucky Rabbit is booted to the red planet, which is populated with strange creatures and a Martian king (which echoes what’s going on in this episode of Loki). For those of you out there who aren’t Disney historians, Oswald the Lucky Rabbit is the animated character that Walt Disney and Ub Iwerks created prior to the arrival of Mickey Mouse.

Also, I’d like to point out that the drive-in is from a town called Wrightsville, which was referenced previously in “The Nexus Event” episode as one of the places where some kind of apocalyptic event took place, which is why Sylvie sent a reset charge there.

The license plate on Mobius’ borrowed pizza delivery car says “GRN-W1D,” which seems to be a reference to Mark Gruenwald, the comic book writer and creator of the Time Variance Authority and inspiration for the look of Mobius himself. It’s not the first time Gruenwald has been referenced on the show either.

Man, this episode is full of Marvel Comics lore. Another structure you’ll see among the desolate landscape of The Void is a chunk of a statue that appears to be The Living Tribunal. First appearing in Strange Tales #158, The Living Tribunal is a cosmic entity that is in charge of overseeing and judging every reality in Marvel’s multiverse. They’re represented by a statue featuring three faces: one entirely covered by a shroud, another with only the eyes covered, and the last one with the face fully visible and only its head is hooded.

This is likely another deep cut for Marvel Comics fans, but it could also be a hint of what the Time Variance Authority has really been up to. Perhaps The Living Tribunal was dispatched with by the Time Keepers or whoever made it seem like the Time Keepers ever existed.

Helicarrier and The Dark Aster

There are two familiar vehicles that can be spotted towards the end of this episode. There are two shots where a SHIELD Helicarrier can be seen crashed in the background. Meanwhile, the shot of all our heroes standing and looking out at Alioth also includes the Dark Aster crashed into the ground. That’s Ronan’s ship from Guardians of the Galaxy. Honestly, we wouldn’t be surprised if the Millennium Falcon is laying around The Void somewhere, making Patton Oswalt’s epic Parks and Recreation filibuster a reality.

The Quantum Realm or The Dark Dimension?

Finally, we have what could be a glimpse of either the Quantum Realm or the Dark Dimension when that mysterious mansion is shown to be hidden within the Alioth. The cosmic waves in the background of the mansion could be from either environment in the MCU, though they seem to fit more easily in the Dark Dimension’s aesthetic from Doctor Strange. But since time also works differently in the Quantum Realm, it could easily be there too. Surely, the finale will provide us with some answers.

The first five episodes of Loki are available on Disney+ now and the finale arrives next week.

The post 14 ‘Loki’ Episode 5 Easter Eggs and What They Could Mean for the Marvel Cinematic Universe appeared first on /Film.