These Philly Cheesesteak Stuffed Peppers are a delicious low-carb spin on the classic sandwich and a tasty dinner idea you can prep ahead of time. 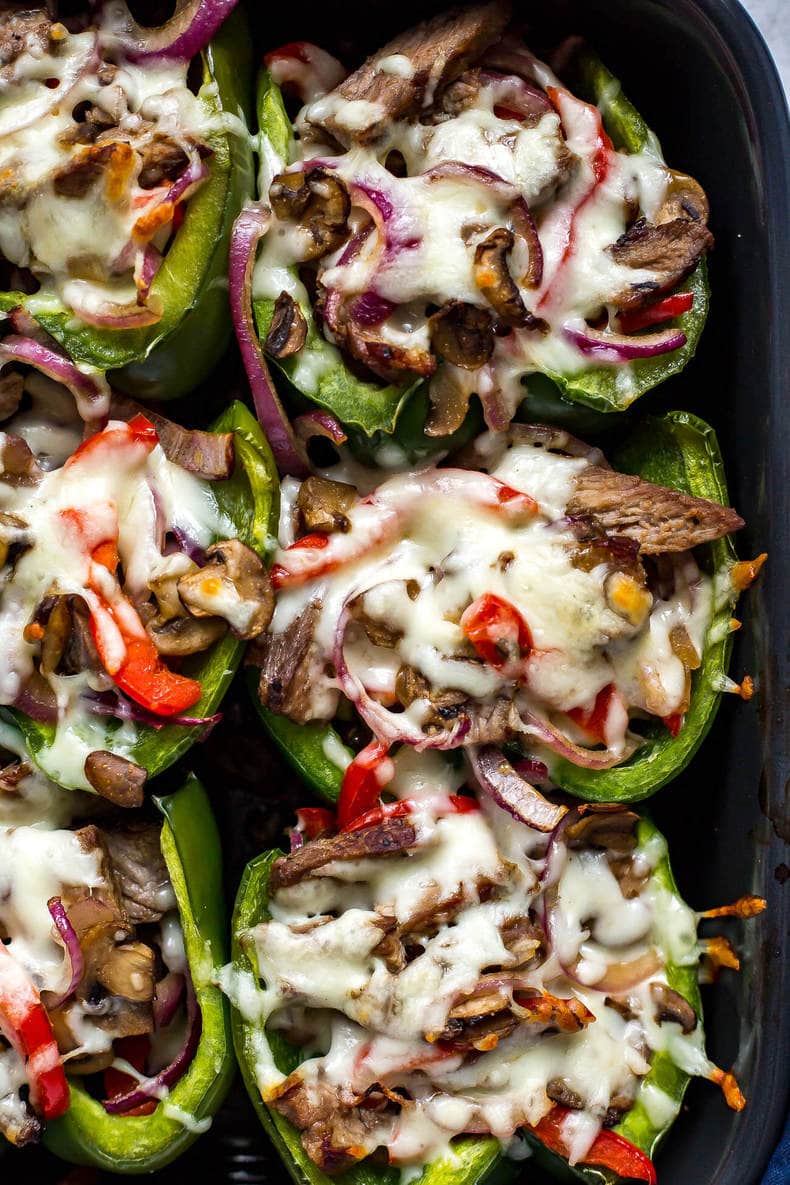 If you've ever eaten a Philly cheese steak, these ingredients should look pretty familiar to you: 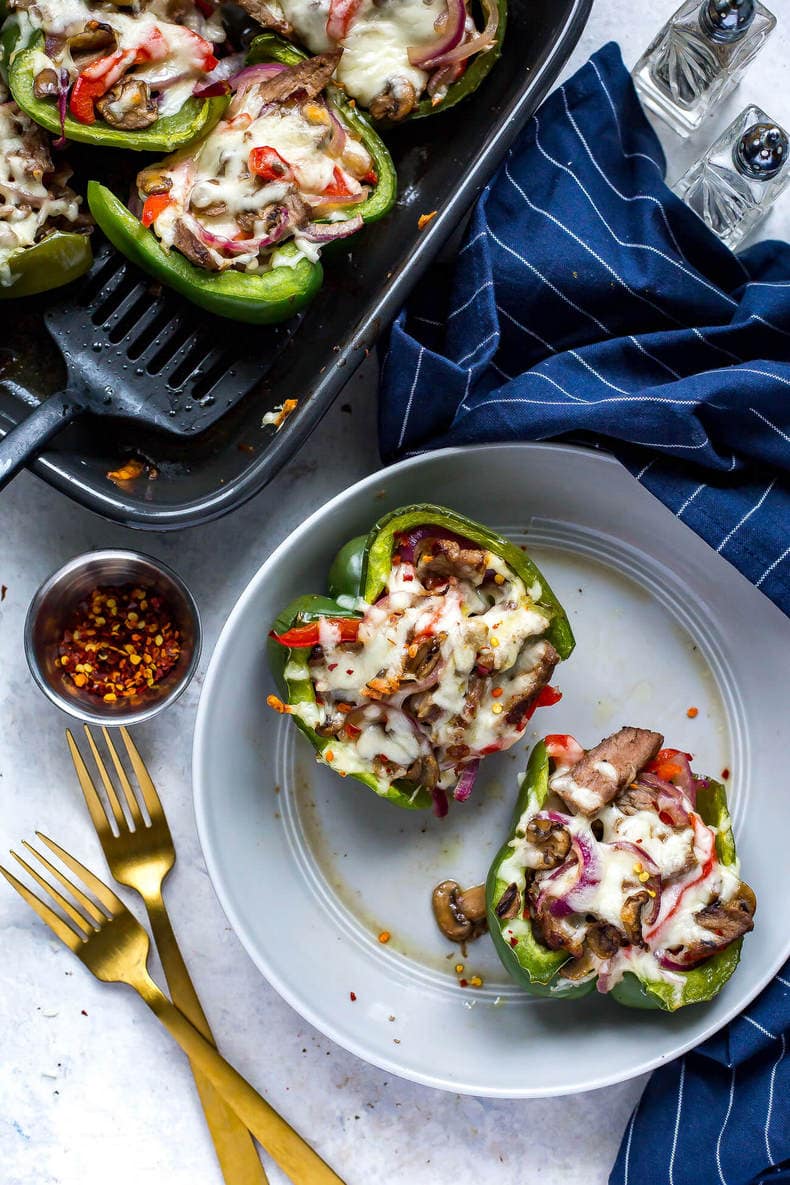 While they look and taste really spectacular, they're super simple to make. 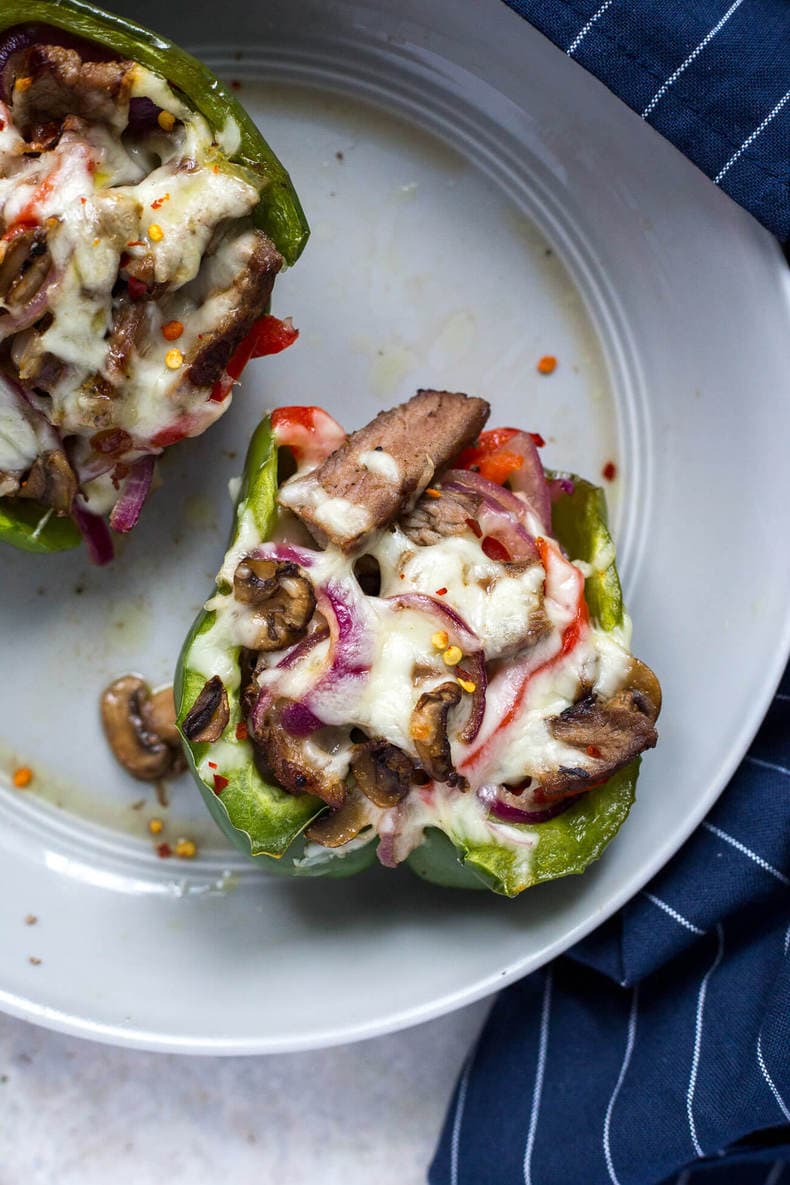 This is the perfect recipe to “make your own” by swapping out ingredients or adding in new ones. Here are a few suggestions to get your creative juices flowing: 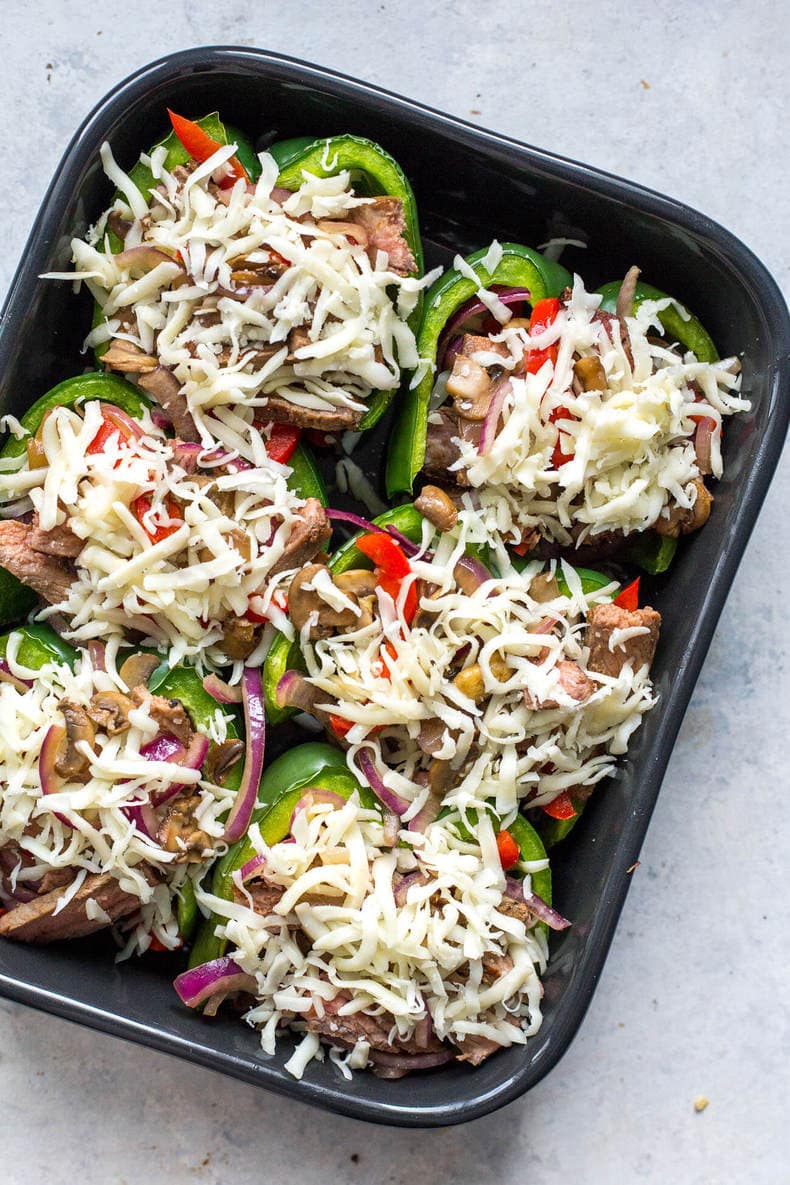 While this meal is low carb, at 12g of net carbs per serving it's not low enough for keto. But it's an easy enough thing to fix!

So if you're following a keto diet and want to bring the carb count even lower, try these solutions:

Making these simple changes will bring the net carb count down to about 6g per serving!

You can use ground beef instead of steak in this recipe. Just cook it thoroughly on the stove and drain it well before stuffing the peppers with it. 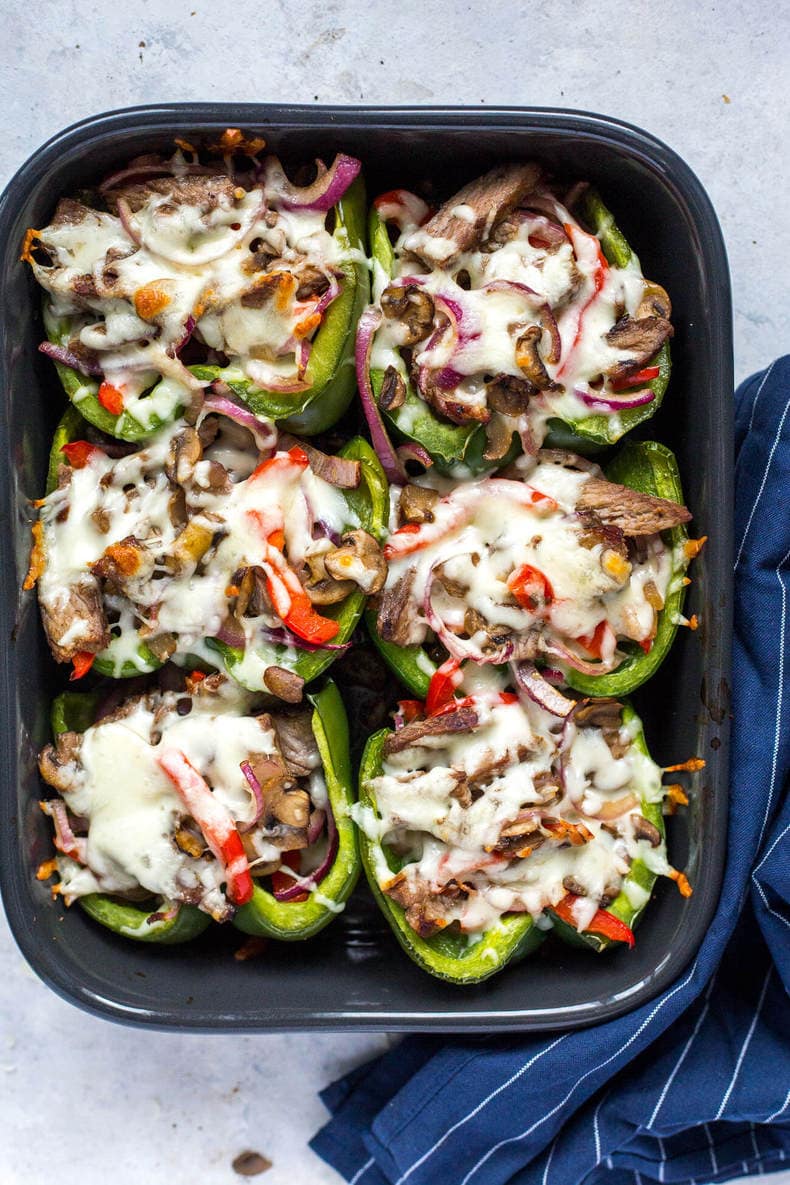 How to make peppers softer

Some people like to have a softer pepper “shell” instead of a firmer one. If this is you, it's really easy to make them that way! It takes a little more time, but worth it if this is your preferred texture:

Instead of 400F, heat your oven to 375F. Stuff the peppers but leave off the cheese, and cover them with aluminum foil. Bake for an hour before removing the foil lid, adding cheese, salt, and pepper, and baking for five to ten minutes until it melts.

Baking them this way will make them nice and soft, but not mushy!

What to serve with stuffed peppers

Some crispy roasted potatoes are the perfect companion for the peppers! Cube them, oil them up, and season them before tossing in the oven with the empty green pepper halves. Then they'll all finish up together!

They're also great with a side of cauliflower rice to keep the carbs down. 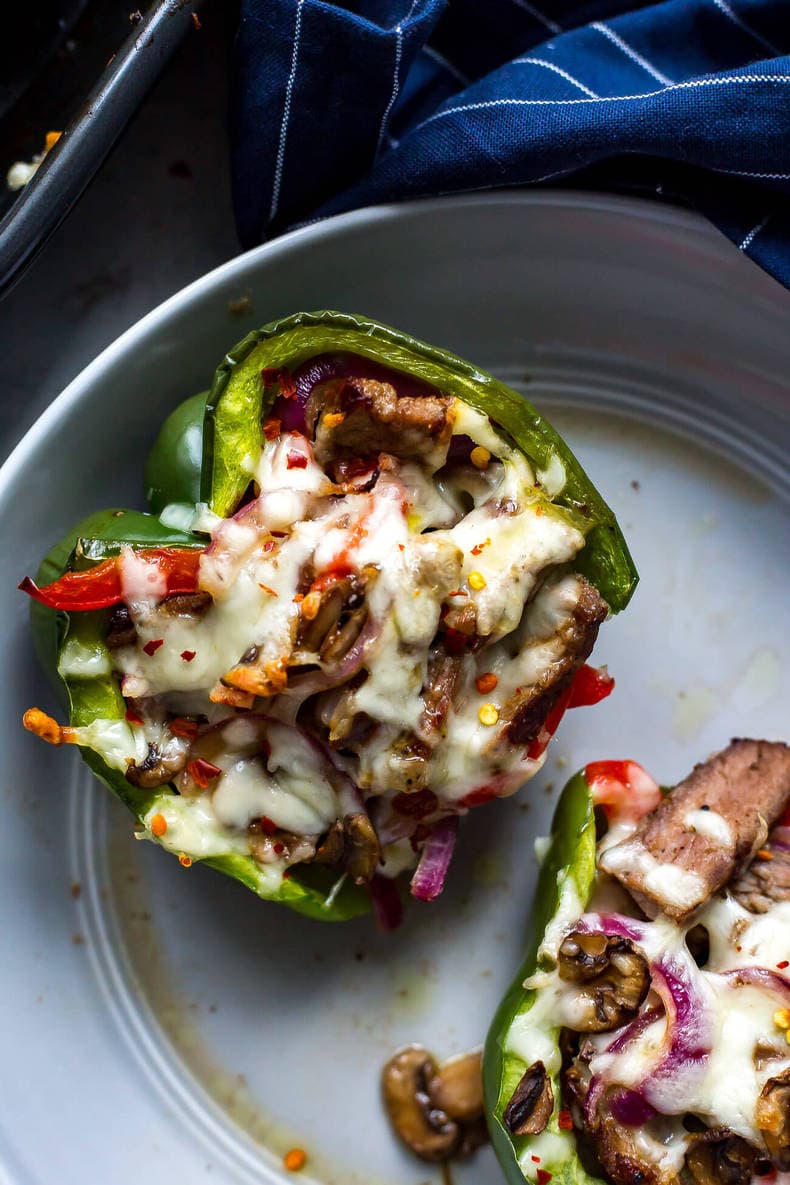 You can assemble the peppers the day before and keep them in the fridge before their final bake. Just add ten minutes on to the baking time.

For storing leftovers, keep them in the fridge in some glass meal prep bowls for 3-5 days. Reheat them in the microwave until heated in the center. You can also reheat them in a baking dish covered with aluminum foil at 375F for 30 minutes.

Can you freeze stuffed peppers?

Yes, you can! The texture won't be exactly the same, but they do fare pretty well in the freezer.

Cover and freeze your fully cooked peppers in the baking dish once they're totally cooled. Thaw them by placing in the fridge overnight. Then, just uncover and bake in the oven at 375F for 30 minutes or until hot all the way through. 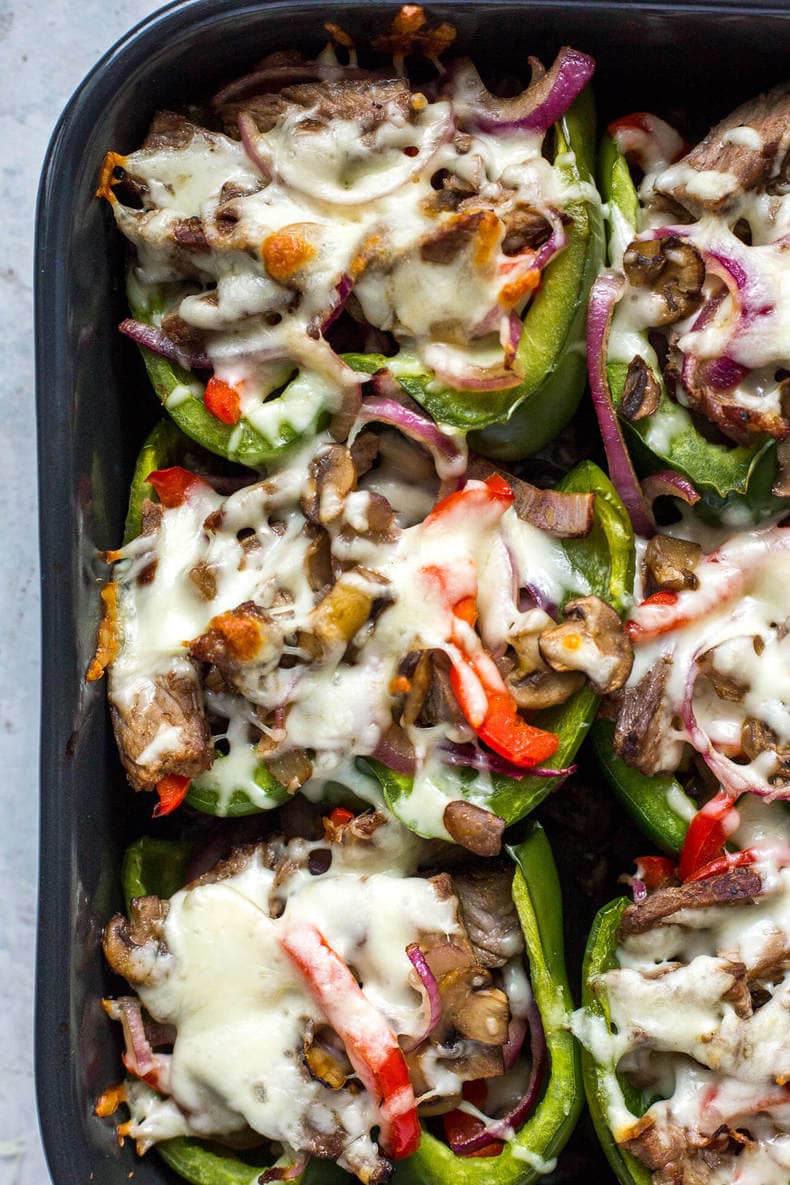 If you're looking for some more delicious ideas to make busy weeknights easier, check out my top healthy recipes below!

Tools to make this recipe 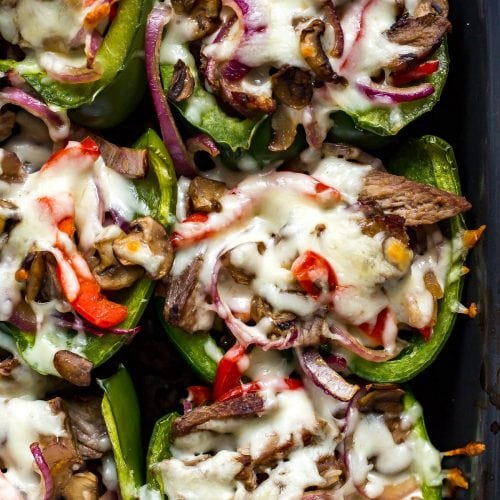 The post Philly Cheesesteak Stuffed Peppers appeared first on The Girl on Bloor.